This week’s lecture provided an interesting glimpse into how music shaped culture, patriotism, and national allegiance in 19th century Vienna. Beyond that, it provided a lens through which to evaluate the role that music can play in creating a shared civic identity.

Nicolas Mathew’s insightful lecture showed how the dissemination and recital of printed music gave the Viennese a sense of communal belonging. Music created a tableau depicting how important battles, including the Battle of Leipzig, played out. Intricate pieces by celebrated composers, including Beethoven, constituted music as theater, where percussion was often used to quite realistically represent cannons being fired. It struck me as being almost a reversal of silent film; instead of artists using soundless visuals to depict a story, composers recounted civic glories solely through sound.

Here’s an interesting link about the continued legacy Beethoven left on the city of Vienna: http://www.independent.co.uk/travel/europe/note-perfect-beethovens-spirit-lives-on-in-vienna-1650203.html

The most interesting issue raised by Mathew was how these battle songs acted as a means for catalyzing the creation of a shared civic identity. These songs were not recorded – the written notations were provided to Viennese citizens using a burgeoning printing industry so families (notably women) could play these songs in their homes and together recount heroic and victorious battles. Citizens were no longer passive “spectators” but now an involved “audience.” The result was an engaged populace, one buoyed by civic pride and a sense of inclusive civic identity. 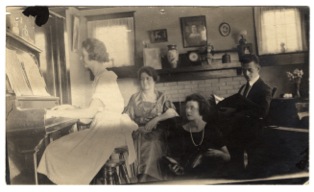 
Unrelated to the points above, I couldn’t help but recount a lecture from earlier this year by Georgina Kleege and Chris Downey about how blind people experience cities. They described how important auditory inputs are for blind people in understanding their surroundings and city at large. Sound is a sense sighted people often take for granted, choosing instead to walk streets listening to pulsating Apple earbuds. Kleege, Downey, and Mathew all describe the role that sound plays in reading, sensing, and defining cities.

Upon leaving Mathew’s lecture, I couldn’t help but recall the famous first scene of Woody Allen’s “Manhattan,” where Gershwin’s “Rhapsody in Blue” is used to provide a canvas upon which to paint a picture of New York City. Romanticism, chaos, loud, quiet…all things conjured up in the song that symbolize various elements of Manhattan. Music can be an interesting prism through which to learn about and sense a city. Mathew’s lecture took that idea a step further by illustrating how music can have a profound impact on how citizens relate to one another as well as appreciate their heritage and nationality.

Matthew Goodman is pursuing an MBA at the Haas School of Business.