Nevertheless, She Persisted: Women and Land Rights in China

Posted on February 23, 2017 by Tina Novero
Filed under: Art+Village+City, China 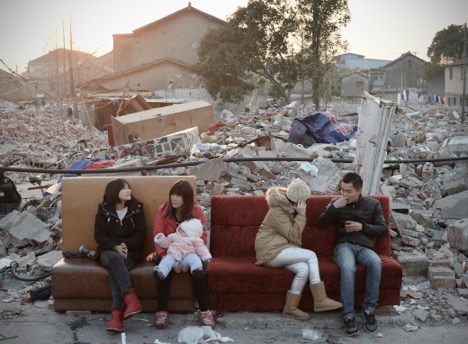 The Constitution of the People’s Republic of China promises women equal rights. But in reality, many women have to petition for years to secure equal legal rights to their village lands. Their dogged persistence is a striking example of the way quiet, long-term activism can bring about changes to people’s “right to the city,” said Lanchih Po at a recent talk sponsored by the Global Urban Humanities Initiative at UC Berkeley.

“Their activism is not photogenic,” said Po, an associate adjunct professor of East Asian Languages and Cultures at UC Berkeley, who described women who singly or in groups of two or three show up at village offices without banners or fanfare month after month, or bring lawsuits that can stretch on for decades.  “They are considered a headache by local officials…they are persistent for years and years. They just don’t go away. You should see the faces of the officials when the women show up—it’s like they’ve seen a ghost.”

Po studied a town where a woman named Hui protested at the village office three to four times a week for more than ten years.  “I’m so angry - I have difficulty breathing…I can’t stand how they look down on women,” Hui said.

For several decades, Po has been conducting research on villages in southern China’s Pearl River Delta, focusing on the activism of women seeking their share of rights to communally-owned rural land. In the fast-urbanizing, densely populated area around Guangzhou and Dongguan, just up the Pearl River from Hong Kong, these citified “rural” lands often generate significant income when used as sites for factories or real estate development.

The activism of women takes place in the jurisdictions known as “villages,” which have far more autonomy from the central government in China than “cities” do–even when the villages are surrounded by metropolitan sprawl and physically look quite urban. There is an ongoing battle for power between these islands of village government and the central government.

The villages jealously guard their right to self-determination, including the right to limit the number of villagers who are named as members. By limiting who counts as a citizen of the village, the more-or-less democratically elected village leaders maintain the value of each citizen’s share of the communal land and the revenue it generates.

Excluding village women who marry men from outside the jurisdiction is a key strategy for reducing the dilution of shares.  But in recent decades, these “waijianü”  or “out-married women” have been lobbying for their share of the villages where they or their ancestors were born. When the village claims women are no longer citizens of the village because of divorce, widowhood, or “outmarriage,” the women find they are counted as aliens in their native place.

So they petition higher levels of government for protection, much as African Americans in the American South looked to the Federal government to protect their rights against discrimination by local authorities.  Still, the central government struggles to enforce national laws.

“In China there is no shortage of beautiful laws, whether environmental or relating to people’s rights, but the problem is always implementation,” says Po.

Po says the protesting women in the villages are asserting their rights in a way that is rare in China—by citing the Constitution. “They are asserting their right to the city and their right to change the urbanization process not only through issues of resource distribution but by demanding acknowledgment of their membership in the community.”  These issues are not unique to China, said Po, noting that this kind of “politics of recognition” (following Charles Taylor) does not solely have to do with economic benefit, but also the right to political visibility.

On the one hand, urban village jurisdictions in China represent important zones of resistance to central state control where unique urban physical form and social relations flourish. On the other hand, they are sometimes bastions of discriminatory local customs. When local elected officials deny the citizenship of people in their midst and more distant unelected state officials seek to force that recognition, the picture of democracy and the right to the city becomes very complicated, indeed.

You can see Po’s research on other aspects of Chinese urban villages here: