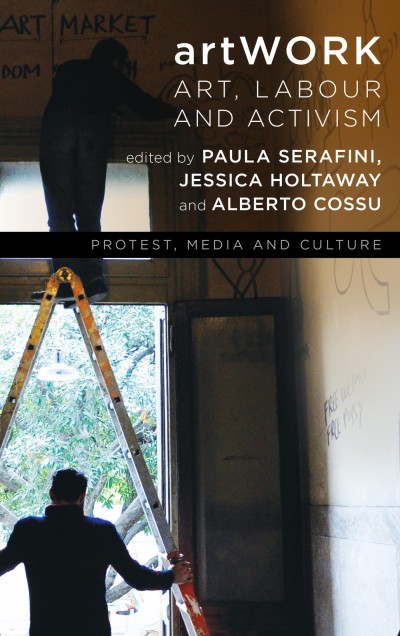 Global Urban Humanities faculty member Jason Luger is co-teaching the GUH Core Seminar in Spring 2018 with Angela Marino: Populism, Art and the City. He recently published a review of  ArtWORK:  Art, Labour and Activism by Paula Serafini, Jessica Holtaway, and Alberto Cossu inAntipode. Here is a short excerpt from the review:
"Contextually, the volume fits well amidst geography’s creative (re)turn (De Leeuw and Hawkins 2017), and also the convergence across several fields where the political–and political socio-spatial relations–has once again become central to discussions (as Dikeç and Swyngedouw 2017 argue). Serving as a bridge between the parallel and related–yet often disciplinarily distinct–literatures on art geographies, politics and political economy, and comparative urbanism, Serafini et al.’s volume represents an important effort to bring these areas together. While other recent works (e.g. Luger and Ren 2017; Zebracki and Palmer 2017) likewise approach the flows and networks of art’s relationship to the urban landscape (or “artscape”), this collection zeros in on the production, embodiment, and practices of processes that are both the art’s subject and involved in the art’s impact and meaning (p.2). This less conceptual, more descriptive focus on the political production of art, rather than just a focus on the meaning/interpretation of the art itself is welcome. The volume is also pointedly political, which is required in these insurgent (and populist) times."
The full review can be found here.

About Jason Luger -
Jason is the co-editor of the volume Art and the City: Worlding the Discussion through a Critical Artscape (2017), and his research has been featured in academic journals such as CITY, Antipode, Geoforum, the International Journal of Urban and Regional Research, and Media and Culture.

About the authors of artWORK -
Alberto Cossu is a Postdoctoral Research Fellow at the University of Milan, Italy.
Jessica Holtaway is a PhD candidate in the Department of Visual Cultures at Goldsmiths College, University of London.
Paula Serafini is a Research Associate at CAMEo Research Institute for Cultural and Media Economies, University of Leicester.
The book is available for purchase here

About Antipode -
Antipode: A Radical Journal of Geography is a peer-reviewed scientific journal published five times per year by Wiley-Blackwell and produced by The Antipode Foundation. Its coverage centers on critical human geography and it seeks to encourage radical spatial theorizations based on Marxist, socialist, anarchist, anti-racist, anticolonial, feminist, queer, trans*, green, and postcolonial thought.