The Neighborhood in the Morro. Heterogeneity, Difference, and Emergence in a Periphery of the Global South

Posted on October 01, 2019 by sarahhwang@berkeley.edu
Filed under: Sao Paulo

Architecture PhD candidate Giuseppina Forte published an article in the September 2019 issue of Lo Squaderno titled "The Neighborhood in the Morro. Heterogeneity, Difference, and Emergence in a Periphery of the Global South." Her article is a sensory ethnography from a collection of urban ethnographies on São Paulo. Forte completed the Graduate Certificate in Global Urban Humanities in 2019 and is a 2020 Global Urban Humanities Fellow. You can read her abstract and excerpt below as well as the full article. 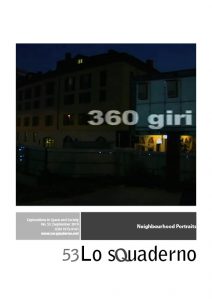 Forte, Giuseppina. "The Neighborhood in the Morro. Heterogeneity, Difference, and Emergence in a Periphery of the Global South." Lo Squaderno, no. 53 (September 2019). Read the article | See the full issue

Abstract
Read through its most visible characteristics, the neighborhood in the morro (hill) can be anywhere in the peripheries of São Paulo, Brazil, and cities of the global South. Its specificities might disappear within general frameworks used to study urban peripheries, including center-periphery dichotomies, informal urbanism, and the essentialized identity of the poor. This portrait, instead, is about the neighborhood as a landscape of multiple histories, where heterogeneity and difference have produced specific spaces, rhythms, and their sensory emanations. Such an ethnographic approach provides a deeper understanding of emergent forms of the periphery assembled around certain visibilities, practices, and subjectivities, and engaged in uneven patterns of democratic city-making.

Excerpt
Against the bright sky of a weekday summer morning in São Paulo, I have counted 24 helicopters in an hour. They fly from the business center in Itaim Bibi to the Guarulhos airport to the closed condominium of Alphaville, fifteen kilometers northwest of the city. Some of them may land at on-demand heliports disseminated across the Serra da Cantareira, the Atlantic forest that marks the end of the municipality of São Paulo to the north. By helicopter, brides descend amid their wedding guests in the Serra and residents of the residential complex Alpes da Cantareira reach their 1.5 million-dollar houses.

One thousand meters below them, a skin-like fabric of dwellings is perched on the hills, along the basins of rivers, and on areas at risk of flooding and landslides in the Tremembé district. As in other urban peripheries of the global South, Tremembé residents have auto-constructed (DIY) their houses in favelas, illegal and legal land subdivisions. If the elites up there in the Serra can still enjoy the luxuriant vegetation of the “Brazilian Switzerland,” as newspapers used to call Tremembé in the 1960s, people down there in the hills and valleys have been exposed since the 1970s to the effects of massive urbanization.