Professors Niemeyer and Rael are engaged in a project in collaboration with the City of San Leandro that aims to bring low-cost sensors into the urban setting, collecting data about city life and making it publicly accessible. As a participant in this class myself, I have been able to grapple with many of the issues this project raises around surveillance, monitoring, data collection, and urban citizenship. Niemeyer and Rael are pushing for an approach to data collection and interpretation that involves the community, is open and transparent, and creates the possibility for real change.

One thing that Professor Niemeyer didn’t mention in his talk that in a way served as a key prototype for the San Leandro project is his “Black Cloud Citizen Science League” project in Los Angeles in 2008 (see graphic below). 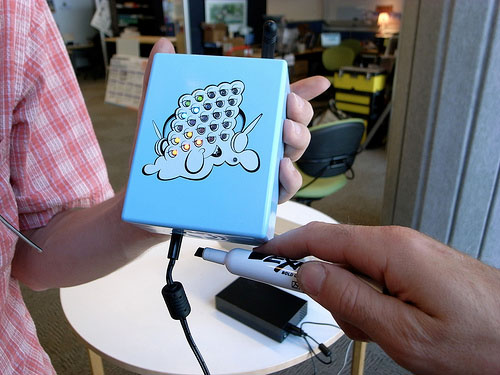 
In this project, students in South Central LA were given mysterious devices that they carried around their neighborhoods and reacted with lights, only later figuring out what they were measuring: volatile organic compound (VOC) pollutants in the air. In a surprising twist (reported on by Planetizen in greater depth), the most polluted places the students found were their own classrooms, because of the harsh chemicals the cleaning staff used to remove marker graffiti, and the lack of suitable ventilation in the rooms, some of which lacked windows at all.

The outcome of the Black Cloud project was a greater environmental awareness on the part of the students, and demands for better ventilation of classrooms, which the LA Unified School District has addressed. Not every story will have such a fairy-tale ending, but this demonstration of possibility and empowerment in data is what drives the San Leandro project to come up with new ways to collect, represent, and mobilize urban data. Whatever comes of this new experiment, the project is a valuable case study of the kind of work that can be done at the intersection of technology, design, and civic engagement, and the challenges that face such collaboration.

Will Payne is a graduate student in the Geography Department at UC Berkeley.