Art+Village+City: On Video as a Method and What Constitutes a “Site”

The research studio paired up in teams and produced 7 short videos depicting a “Chinese” site. These sites were the Pacific East Mall in El Cerrito, Oakland’s Chinatown, San Francisco’s Chinatown, and two dollar-stores in the Mission and West Oakland. The films produced were markedly different in style, pace, content, and scope, prompting the class to reflect upon the elasticity of a site’s users, boundaries, activities, objects, everyday life, and emotional qualities.
— Winnie Wong

“During our editing process we felt like we did not have enough to work with yet, at the same time, this made the process relatively quick. Others talked about the difficulties they faced with too much film and the decisions they had to make cutting things out. For me the question remains whether a short film is more powerful in its ability to catch the attention of the viewer or if the long film is better in its ability to capture more. However, this also raises the question – do you necessarily need length to capture everything that you want to depict and to give an initial sense of what a place is like?”
— Katie Bruhn (Southeast Asian Studies)

“The most difficult aspect to this video project was not the process of making the video but the actual selection of a “Chinese place.” Although Brittany and I decided on the Asian Library in Oakland, what we ultimately captured was a much larger space than the singular place we selected; this included the festival outside of the library as well as some of the content filmed within the library itself. The American slang book that we picked up is one example of how a singular artifact has the potential to reveal histories, stereotypes, and cultures that occupy a much larger space than the Chinese aisle in the Oakland Asian Library.”
— Trude Renwick (Architecture)

“Video as a means of documentation, collection, communication and representation is really powerful. You can only capture so much and what you capture is subject to circumstance, but the format of the project is something that people are familiar with and can easily consume, even if the content of the video is difficult to decipher….It can also be highly manipulated to achieve certain effects. Like photography, even though it captures real images (not likenesses or interpretations like drawing, painting, etc.), the hand of the artist/producer can still be felt. I think that was made clear from the differences we saw in the Xiuxian/Story and Valentina/Ettore videos, which were filmed in the same place at the same time but felt so different and as a result had completely different effects on the viewer.”
— Genise Choy (City Planning)

“I wanted the film to reflect our impressions of walking through this so-called Chinese space without any overt purpose - though I think it is evident that we were searching for one. Belatedly, we realized that we had stumbled upon a character in the tunnel, a woman pulling a rollie suitcase in a “Where’s Waldo” sweater, but we lost track of her due to our red herring, the BART excavation. We were also unclear about our intent in documenting this space. How does one document a site, both with or without asserting one’s own narrative?…This opens up a range of approaches to “documenting” a site - do you treat the (possibly boring, banal) place as the object of your film, or do you use it as a setting to foreground an action, event or narrative which you either find or create? I suppose in a way, in our film, our own searching eye, through the vehicle of the camera, became the event of the film.”
— Susan Eberhard (Art History)

“I decided to document an 'all American' dollar store. Most of the low-consumer objects in this store were made in factories in the Pearl River Delta. It’s fascinating to note that both the producers of these objects and their consumers are usually struggling in the socio-economic apparatus. There’s a global market that profits from these transactions….Looking through the material and editing was the hard part. The research and image recording reads superficially and feels like the potential introduction for a larger/denser narrative….There’s a lot of material to sculpt from these sites. I’m immensely interested in the metaphor of the artificial flowers as a skeleton to expand upon the tension between the object/ its producer/site of production and its consumer…”
— Jose Figueroa (Art Practice)

“What were we looking for? did not get asked or answered at any point in the process of shooting, editing or critiquing the work. Had the question been posed, what might have gone differently? Would we have “found” more or less? What would more or less look like in this process?”
— Annie Malcolm (Anthropology)

“Honestly, the Oakland Chinatown leaves me with a better impression than the Pacific East Mall, probably because it is more dynamic, more vibrant. In contrast, the Pacific East Mall gives me a feeling of stagnancy and dullness. I told Story that I think of the Pacific East Mall like a museum, storing the old-dated material, sentiment, and lifestyle of the 1980s. I kept thinking about the different spatial forms of these two sites, open and enclosed. Does spatial quality have emotions?”
— Xiuxian Zhan (Landscape Architecture)

“Having just struggled with editing and giving our raw footage some semblance of an order or meaning, I was hyper aware of all the wonderful things other people thought of to do (or did intuitively) with their films. Playing with splitting the screen to juxtapose or compare objects or experiences was very effective and visually interesting. I also liked the feeling that walking a loop gave, with familiar landmarks giving a spatial sense that is otherwise hard to capture in an edited film. A loop can be imbued with a ritualistic quality by making a connection to some theme or historical reference. In general, playing with references and questioning the underlying meaning of the everyday seems to have much potential. Lingering on objects, and especially architectural spaces and details, forces people to see things that they might otherwise miss. Similarly, footage of “back of house” activities has much to offer the audience, as it exposes a world otherwise not seen. Editing can be used to give the audience a sense (through pacing or music) that represents an idea of how a place is or should be.”
— Story Wiggins (Landscape Architecture)

“We had the advantage of being able to compare our video with Xiuxian’s and Story’s work who filmed the same space. It was striking how filmed under the same circumstances and even with similar scenes, both videos had very different takes on the space they were portraying. While our video had an emphasis on the empty spaces we perceived, compared to the density we were expecting, Xiuxian’s and Story’s video had a much more social narrative that was constructed upon the interviews Xiuxian was able to perform in Cantonese. These interviews opened up the space of the Mall, and it seemed a much more lived space than in our approach.”
— Valentina Rozas-Krause (Architecture)

Happy New Year from Art+Village+City in the Pearl River Delta!

Filmed and edited by Katie Bruhn and Annie Malcolm 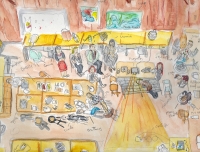 Art+Village+City in the Pearl River Delta is one of two interdisciplinary courses being sponsored by the Global Urban Humanities Initiative in Spring 2015. Students in this research studio are utilizing a variety of research methods from interviews to video documentation to explore the ongoing evolution of relationships between urban and rural spaces and people, and the emerging role of the arts in China’s Pearl River Delta. Students paired up to create videos of places related to China and the Chinese diaspora throughout the Bay Area. Here is José Figueroa's watercolor documentation of the in-class presentations! We'll be posting one of…

The Subtle Details of Community and City

As part of the Global Urban Humanities Initiative Colloquium called Reading Cities, Sensing Cities we have asked students and visitors to write responses to each of the weekly guest lectures. November 13, 2014 From 1904 Dublin to the Megacity: Public Access in Ulysses and Katarina Schröter’s The Visitor Catherine Flynn (English) Presentation available here. Video of the conversation available here. Flynn’s talk raised the question of urban knowing and related it to the literary and filmic representations of the city and megacity. by Yasir Hameed Professor Flynn’s talk last week discussed works by James Joyce (Ulysses) and Katarina Schröter (The…