This week in the studio we worked on two common forms of fieldwork representation that are often overlooked: the single photograph, and the anecdote. Each student took a single photograph and told a single anecdote. In our studio crit, we reflected upon what an anecdote or a photograph can and cannot do as a form of research representation. At issue are questions of narrative and image, both in our own making of images and anecdotes, and in our framing and telling of them.
— Winnie Wong

“Upon first hearing this assignment I began to frantically think about which anecdote to tell: something from childhood, something from fieldwork during college, something from fieldwork in Johannesburg, or Durban, or Empangeni. And this led me to think more about memory and the temporal aspect of the anecdote. How a story unfolds linearly in the present while attempting to retell something from the past. Anecdotes are made meaningful only through their relation to the present—their contextualization in a current conversation.”
— Brittany Birberick (Anthropology)

“[Selecting to research] something that appears at first glance, uninteresting to most or utterly banal: In doing so, we are forced to consider a source or an event’s relevance, thinking more critically about its place within a large context and how we might articulate its significance in comparison to more ‘extraordinary’ events. By doing this we are able to reconceptualize the importance of something that initially seemed unimportant while also, in some instances, demystifying that, which for whatever reason may have seemed more extraordinary. Jose’s anecdote exemplified this static. His anecdote began with a photograph that in the moment it was taken was merely a record of his fourth birthday. However, looking at this ‘ordinary’ event from a more critical perspective, taking into account all that it represented of Jose himself, Jose was able to make this photo speak in a way that expressed various levels of complexity.”
— Katie Bruhn (Southeast Asian Studies)

“My approach to the anecdote was to translate a banal, specific and relatable personal memory into a complex read that allowed a bigger understanding of an image in time with all of it details. Through the process of ekphrasis I transformed my personal discovery into a written paragraph. Although, I am happy with the result I can’t help but wonder the degree to which I am purposely manipulating the reader through the process of story telling…. Although it can be argued that a text is also never static as its read will vary depending on the reader and the date in which its read, what I enjoy about the casual story telling is that it’s always open to different iterations and the story is never completely the same. Its written form succeeds in capturing and preserving a moment of the story in time (not unlike a photograph), yet it fails in allowing this story to flow and restructure itself depending on the context it gets to be shared. Storytelling is intrinsically performative yet the line between the spontaneous and the scripted is blurred in the moment. There is no physical evidence of an artifice.”
— Jose Figueroa (Art Practice)

“The question that kept arising: what is the difference between an anecdote and a story? I have always had the sense that an anecdote is something which bubbles up spontaneously in conversation and is told/listened to, rather than written/read. But in the context of our research, it takes on a different meaning. The anecdote is a depiction of certain details and textures of everyday life which are scalable, or recognizable as pieces in the larger mosaic. …Each person’s anecdote illuminated things about them, not only by the story and its tone, but by the fact that it was that story which was chosen. This circles back to the question of self-¬reflexivity which keeps coming up in each of our projects, ie. where is the author and how have they represented themselves?“
— Story Wiggins (Landscape Architecture)

“The best anecdotes this week were not necessarily the most well written, but they were the ones in which I could see the storyteller through the words on the on hand, or captured a climax, a moment in which a feeling emerges on the other hand. I really connected with Story’s anecdote. Although I may not know much about her past I felt a strong connection to the struggle or broader atmosphere she painted for us. There was a way in which her anecdote is built up and vividly described through places and people.… Although such a complex build-up was not present in many of the anecdotes, others also chose a singular moment around which the anecdote was built. Valentina creates this moment in the office, in which time freezes around her as she struggles to not necessarily answer the fairly direct question but creates an inner dialogue about a much more complex dilemma she is facing. Unlike the three dimensional or atmospheric ways in which some of the anecdotes were told, Jose paints a self portrait of himself through is description of this photograph he found, describing the tragic irony of this moment.“
— Trude Renwick (Architecture)

“Susan’s anecdote about being interviewed by two Asian students made sense and was impactful in part because it was told in the context of our class having just done interviews ourselves and having had multiple conversations about cultural differences and social categorization. We, her audience, all understood how to interpret the anecdote because of the context made up of our shared experience in the studio course. On the other hand, José’s anecdote was arguably told without context, except that he gave us hints of context embedded within his anecdote that helped the listener understand what was being illustrated by the photograph (which in many ways was itself an anecdote) in his story…Thus, I would argue that it is not enough to tell a story and call it an anecdote. What makes a story an anecdote is its relationship to a larger context and that context must be understood by the listener to make the anecdote work (otherwise it’s just a story, even if it’s a very good story).”
— Genise Choy (City Planning)

“Telling Brittany’s story was an ethnographic exercise; I acted like she had told me her story in the field. In the retelling of the account, I realized it was amusing because people were laughing. Perhaps because Brittany had already told her own story and there was something about telling someone else’s anecdote that was humorous.”
— Annie Malcolm (Anthropology)

“Meeting Mary Ann O’Donnell was really interesting in terms of these assignments as she constantly takes anecdotes and snapshots from her everyday experience and turns them into material for her blog, Shenzhen Noted. When walking with her and Ettore on campus, I felt like I was in the presence of someone closely and constantly observing her surroundings both critically and with delight. It started when I met her in the City Club. She looked up from her laptop and before saying hello asked whether or not I believed in environmental determinism. Then she contrasted the murkiness of Shenzhen air and social/political space with the appearance of clarity and even rationality of Berkeley. She said she wished she did believe, but she didn’t. So since meeting her I’ve been wondering, in a similarly comparative way, what it would be like to be an ethnographer living in and taking Berkeley as a subject?”
— Susan Eberhard (Art History)

The Albany Bulb and Ephemeral Layers of Territory

Bay Area Landscapes and the Conflict Over Open Space 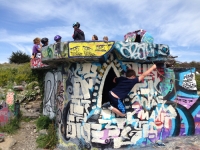