Last week, artist Sue Mark and urban planner/design researcher Anisha Gade gave a talk on their latest creative place-making effort in NOBE (North Oakland, Berkeley, Emeryville). They shared their thoughts on how the cultural project can effectively engage local community groups and shape their sense of identity under the context of gentrification.

Their conversation reflected on the relationships between people and the city. Urban planners and social practice designers should take these dynamic relationships especially seriously. Their project preparation starts with simply walking the streets of Oakland in order to find the boundaries of its neighborhoods. Those boundaries are often blurry and the effort of drawing definite boundaries proved to be impossible, in that the flow of the people, landscape and history are not restricted by arbitrary boundaries. But the walking exercise was a crucial part of preparing for the project because it let Sue and Anisha become fully immersed in the city. Only in this way can a person get a true sense of the city and community identity.

Later in the lecture, Sue addressed the importance of setting and format when prompting community engagement. She had originally wanted to start a discussion about Oakland in the public library. However, she later found that a walking discussion in the streets was more appealing than leading a panel discussion in a crowded dark room. So, she moved the discussion outdoors and the event turned out to be a great success with 75 people showing up to engage in a meaningful discussion while actually experiencing the city’s presence. 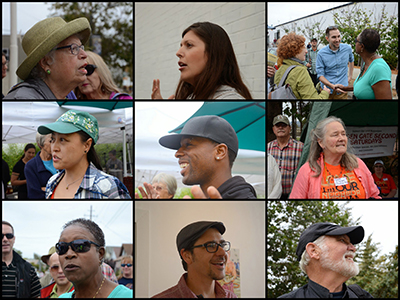 
Although Sue and Anisha’s place-making project is primarily centered on the community, Sue acknowledged that “logic of the place will rule the work rather than the logic of the community.” But they believe that functional relationships between authority (government bodies), organizations and the community are crucial in the construction and success of the project even as they actively probe and prioritize the needs of the community. As a result, their community engagement works heavily towards promoting the wellbeing of the local people. By retrieving the personal stories and history of the community, their place-making project provides a cultural force to unify the local dwellers under the wave of gentrification. By organizing public discussion and thought-provoking activity, their project also serves an important role in transforming the community.