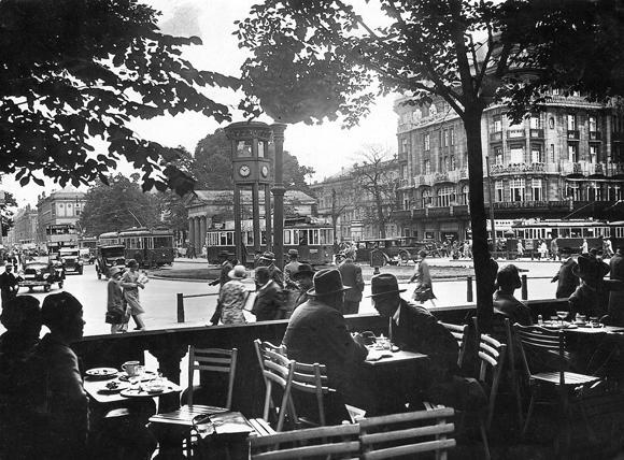 Stefan-Ludwig Hoffmann’s work focuses on uncovering a new perspective on people’s experiences in Berlin before, during, and after World War II. In introducing his work, he comments on the enormous amount of attention the World War II period has received from historians and scholars. He explains that despite people’s fascination with this point in history, little is known about the urban experiences of post-WWII. Hoffmann suggests that much of what we know about the daily experiences of people in the summer of 1945 is skewed or outright false. For example, people tend to understand this period as a time dominated by military control, restricted movement of people, and mass genocide of Jewish people. However, Hoffmann paints a different picture. His work reveals that many “tourists” traveled to and from the city during this summer, creating a sense of movement and excitement within the city. Hoffmann comments on how there is a unique conflict within the city’s landscape post-WWII— in one way the city is bustling and alive, yet in another way it is scarred deeply by the signs of war and destruction. Hoffmann uses different people’s accounts of Berlin during this time to trace this duality. While some accounts reflect the shock and tragedy of the war, other verbal and visual representations focus more on the vibrancy of the city and indeed, the “hectic gayety” that seemed to sweep over the city (Hoffmann). Furthermore, movie houses, nightclubs, and other social gathering spaces were among the first to reopen, which contributed greatly to a general bustle in the city immediately after the war.

Hoffmann goes on to draw a comparison between pre-WWII and post-WWII urban experiences. Focusing his argument on the famous picture depicting Café Josty on Potsdamer Platz, Hoffmann talks about the widespread feeling that Berlin was in decline after WWI. As a result of the 1920s Wall Street Crash in the United States, the German economy, which was reliant on American loans, took a turn for the worst. The economic struggles of this time led to great unemployment and a concentration of homelessness within Berlin. In this context, people believed that the vibrant city they had once known was on a downward spiral.

Ironically, the Nazis made Berlin their target for anti-urbanism sentiments, destroying much of the city’s infrastructure during the war. Yet, the city miraculously made it out of the war more alive than before. As part of their regime, the Nazis rejected the idea of urbanization and instead, advocated for a countryside lifestyle. However, it seems that if we trace people’s experiences in Berlin across this time period we find that despite the massive amounts of damage caused by the war, the city thrived in the following years.

Overall, Hoffmann uses this understanding of urban experiences through time, specifically from the WWII period, to comment on the theme of temporality, especially with regard to “historical events of rapture”. Theodor Adorno, a German Philosopher, wrote in 1944 about this temporality referring to it as a “timeless succession of shocks”. Hoffmann suggests that instead of limiting our understanding of this period to a linear succession of events, we must think of this time as a series of plural experiences.

The work Hoffman does exposes the question: how do we learn about history accurately when we are so fixed in our modern perspective? In order to capture the facts and events justly we must suspend are linear perception of time and dig into how time is experienced differently, especially in moments of great disturbance and shocking realities. Perhaps, for every past there are two histories: one which outlines events chronologically, and one that is more chaotic, reflecting how people experienced these events.