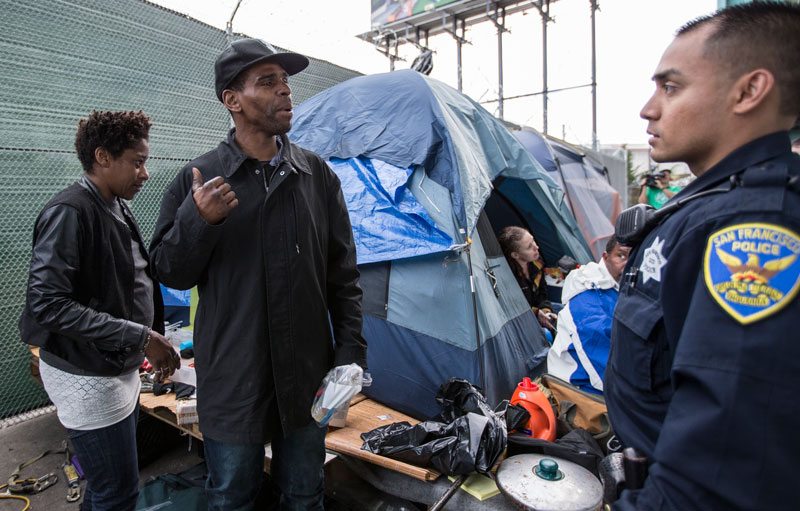 The talk began by situating current responses to homelessness within the history of United States anti-homelessness laws. From warnings to outlaws in the American West to sundown towns in the late 1800s through the 1950s, Herring places law and order at the center of the United States response to homelessness. This approach evolves through the twentieth century into 1990s broken windows policing (Kelling and Wilson, 1982). Herring couples this history with a punitive turn in United States welfare policy, arguing that this produced the current focus on “treating”—or medicalizing—homelessness.

Herring’s ethnographic research in San Francisco examines homelessness policy from above and below. We begin by riding along with San Francisco Police Officers. Responding to a call from homeowners about a person camping on the sidewalk, the officers speed past homeless encampments. After arriving on the scene of the call, officers inform an unhoused man that he must move or receive a citation. The man does not argue and gathers his belongings. The police move on to their next call.

The image of disinterested police officers responding to a complaint underscores a central theme in Herring’s work: that homeowners drive local responses to homelessness. Quotes from police officers, civil servants, and unhoused San Franciscans elaborate on this theme. A portrait emerges of a system framed as responsive to the health and wellbeing crises of homelessness but in practice criminalizing unhoused individuals and responding to homeowner complaints.

We also see that contact with systems of care and enforcement traumatize unhoused individuals.  Herring describes a fear among unhoused San Franciscans of Department in regards to the Public Works (DPW) cleaning crews that are sent to dismantle homeless encampments. Herring argues that fear of DPW cleaning crews surpasses the fear of police officers among unhoused San Franciscans, showing that services framed as addressing the health and wellbeing crises of homelessness mainly address the concerns of housed residents. Law and order policies have been re-branded to meet the demands of progressive citizens interested in maintaining neighborhood character and property values.

Herrings’ work problematizes local responses to homelessness while acknowledging the challenges faced by local governments. The voices of police, civil servants, and politicians humanize the system that designs and implements anti-homeless laws. Juxtaposing the voices of government workers with unhoused San Franciscans shows an interesting alignment between police that enforce anti-homelessness laws and unhoused San Franciscans. Both groups understand that the homelessness crisis is not improved by current policies. In fact, both acknowledge that destruction of property and trauma resulting from these policies exacerbate the effects of homelessness. A disconnect emerges between the voices of front-line workers and politicians guiding San Francisco’s response to homelessness. While policy is framed in terms of outreach and connection with services, implementation focuses on enforcing anti-homelessness laws. The result is local policy described as helping unhoused individuals but implemented to relocate and reinforce homelessness.