As part of the Global Urban Humanities Initiative Colloquium called Reading Cities, Sensing Cities, we have asked students and visitors to write responses to each of the weekly guest lectures.  On August 28, Prof. Margaret Crawford (Architecture) gave a presentation on her continuing research on urban villages in the Pearl River Delta--independent jurisdictions that are being swallowed up physically and administratively by large cities. Along with Asst. Prof. Winnie Wong (Rhetoric), she will be teaching a studio course on the Pearl River Delta in Spring 2015.

Margaret Crawford and Winnie Wong’s work on the Pearl River Delta introduces a unique dichotomy between the rapidly urbanizing city and its encroaching pressure on the autonomous urban villages that they surround. The issue of land seizures has become a ubiquitous cause of social unrest. This has been demonstrated in Crawford’s example of the three day protest in the villages of Wukan in Guandong province between 2011-2012.

In the midst of this social unrest, Crawford and Wong have uncovered a specific population that has the potential to speak out against the degradation of life and culture that this land-grabbing implies. That is the arts village of Dafen. The production of art has become an economic engine for this urban village, exporting artwork to commercial offices and hotels all over the world. Only a taste of art as social protest was showcased in Crawford’s lecture in the construction of an artist’s colony and gallery space underneath a nearby overpass 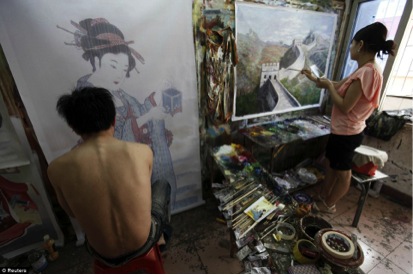 Given the density of talented artists in this region one might ask if there is more potential for resistance. Is it possible for these artists to speak out against the razing of urban villages? Is it beneficial for them to stay autonomous or is there a population of villagers that might embrace the urbanization? As an outside observer it is hard to speculate on the everyday implications that this situation may have on the citizens of Dafen and the Pearl River Delta? Perhaps those who have ethnographic experience in this region could help to provide some insight?

Evan Brooks is a student in the Master of Architecture program at UC Berkeley's College of Environmental Design.