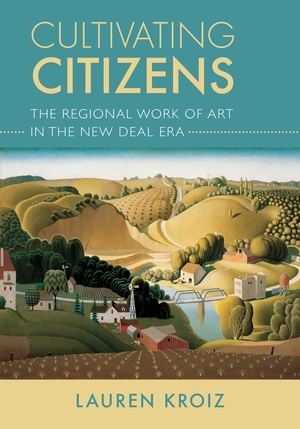 Associate Professor of Art History Lauren Kroiz published a new book on the American Regionalists titled Cultivating Citizens: The Regional Work of Art in the New Deal Era. She also has an essay in the Ashmolean catalogue America’s Cool Modernism: O’Keefe to Hopper that was informed by her work with the Global Urban Humanities Initiative. Read the abstracts and find the books below.

During the 1930s and 1940s, painters Grant Wood, Thomas Hart Benton, and John Steuart Curry formed a loose alliance as American Regionalists. Some lauded their depictions of the rural landscape and hardworking inhabitants of America’s midwestern heartland; others deemed their painting dangerous, regarding its easily understood realism as a vehicle for jingoism and even fascism. Cultivating Citizens focuses on Regionalists and their critics as they worked with and against universities, museums, and the burgeoning field of sociology. Lauren Kroiz shifts the terms of an ongoing debate over subject matter and style, producing the first study of Regionalist art education programs and concepts of artistic labor.

(about the catalogue) As some American artists began to eliminate people and remove extraneous details from their compositions, they often employed neat, orderly brushwork or close-up, unemotional photography. Artists as diverse as Patrick Henry Bruce, John Covert, Georgia O'Keeffe, Paul Strand and Arthur Dove navigated European and American avant-garde circles, picking and choosing new ideas and methods. Inspiration ranged from cubism and machine parts to new technologies, and they found ways to bring order to the modern world through extreme simplification. For them, abstraction involved absence and presence - the evacuation of human beings but also the desire to depict something that would not otherwise be visible or to render visible unseen natural processes like the passage of time, sound waves, or weather patterns. Their artworks provide a new context for the precisionist works in the subsequent sections and point to modern ideas about what art could be. How does a crisp painting technique relate to an aesthetic of absence?