"The notion that diversity in an early team is important or good is completely wrong. You should try to make the early team as non-diverse as possible.”
– Max Levchin, co-founder of PayPal

“I want to stress the importance of being young and technical. Young people are just smarter.”
– Mark Zuckerberg, founder of Facebook

Shannon Steen’s recent talk, Creative Class Civil Wars: Displacement and the Arts in the Bay Area, situated the broad question of how US cities are changing economically in a discussion that touched upon my own studies of technology and culture at the School of Information. Steen used Richard Florida’s notion of the “rising creative class” as the focal point of an examination of the state of art and artists, and the shrinking support of the infrastructure that sustains their work and enlivens our American cities.

Florida propounds the rising creative class as the solution to struggling cities, perhaps the most recent in a line of silver bullet strategies for urban renewal, as a commenter aptly pointed out in the discussion following Steen’s talk. Though the “creative class” sounds like artists of all stripes, Florida’s analysis leans away from the (struggling) thespian, painter, poet or muralist, and towards the oft-lauded tech worker. Many cities have created favorable conditions to usher in this tech worker, his company, and his future startup. Some of the I School curriculum is designed to funnel more workers, albeit thoughtful and informed ones, directly into Florida's creative class. In effect, Florida drops the actual artist from said creative class. What he offers instead is an ode to the tech workers, the “productive” creative class that brings innovation, “disruption,” and infallible youth.

Particularly interesting was Steen’s guidance through the history of creativity as a notion in Western culture, and its move from the exclusive domain of God to that of the Renaissance artist, the elitism of artist as distinct from artisan in the 19th Century, to the scientific study and intentional propagation of creativity in children in the modern era, which saw the beginning of the removal of the artist from her authoritative position on creativity. Steen’s talk brought into relief the fact that the current notion of creativity, like many other commodities in US culture, is something we think we can manufacture on demand, and something that we can grow, as if in a Petri dish, if only we arrange the right conditions for it. Many use the existence and bustling churn of Silicon Valley to evidence the fact that indeed, creativity is being pumped out by the hundreds of startups and apps and interfaces. 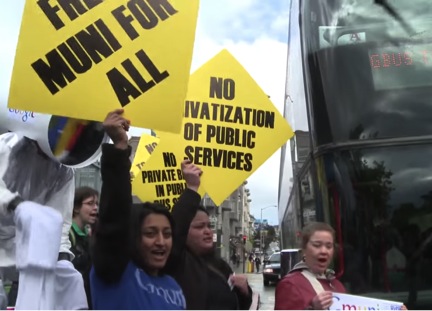 From an April Fool’s Day action by activist group Heart of the City and artist/interventionist Leslie Dreyer of Google bus action fame. Activists blocked buses and announced that a new service, GMuni, would be offering free transit for all.


However, this is all taking place at the risk of the heart and soul of our cities, and artists themselves. As “old-fashioned” creatives like playwrights, poets, writers, potters, sculptors, and their ilk are forced to resort to Indiegogo and other crowd-sourced funding strategies for one-off projects, their ability to thrive and produce art in the city withers. Meanwhile, the tech companies that are operating in the physical world are raising skepticism that this kind of “innovation” is at all good for San Francisco. On the contrary, it has spawned (some) companies that are capitalizing on public goods, sometimes with unabashed greed and opportunism. After Steen’s talk, I wondered how the burgeoning tech worker community might put some of their high incomes towards strengthening the arts in our cities. Although I’m skeptical that the problem would be solved by the very forces that have caused it, it would be interesting to challenge the Valley to produce a startup that makes the crowd-sourced funding of arts infrastructure extremely easy, fun, and hip.

Steen’s talk drove home the fact that there’s a direct interplay between the elements that make San Francisco and its surrounding cities the place to be, and those that forewarn its decline. Those of us at the I School have the responsibility to double-down on our efforts to be thoughtful and discerning in our contributions to innovative technologies, and tread lightly in a city that was made cool long before we came on the scene. Given a recent article by Carlos Bueno in Quartz from which the quotes at the top of this post were drawn, the tech worker culture of Silicon Valley has tended towards insularity and in-crowd behaviors. I can’t think of a better antidote to such insular clique-ishness than a thriving and protected arts culture in the Bay Area.