As part of the Global Urban Humanities Initiative Colloquium called Reading Cities, Sensing Cities, we have asked students and visitors to write responses to each of the weekly guest lectures.  On September 4, 2014, Darin Jensen invited listeners to consider the narrative and spatial aspects of two experiential mapping projects he created with his students: Mission Possible: A Neighborhood Atlas about San Francisco's Mission District, and Intranational International Boulevard about Oakland. Jensen is staff cartographer and lecturer in the UC Berkeley Department of Geography.

While not explicitly framed as such, it’s great to see the possibilities of Psychogeography dusted off and road-tested in the Bay Area. Under the leadership of Darin Jensen, UC Berkeley’s Cartography and GIS Education Lab (CAGE) digs in to explore the complex intersections of the physical and observational worlds.  The resulting collection of mappings shows spontaneity and graphic savvy, but looking into the territories chosen for exploration provides us more questions than answers. 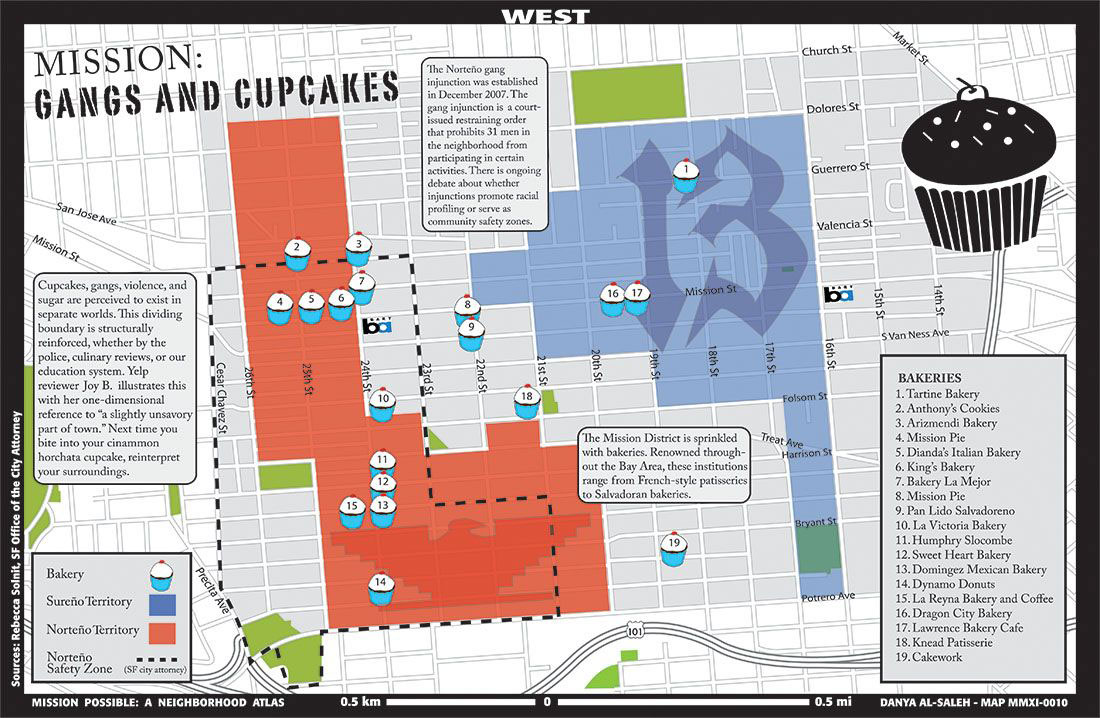 One project, already complete, zeros in on San Francisco’s complex Mission District CAGE Lab teams up with Mission Local, a district-based news site, to create a 22-map “Atlas” and illuminating a variety of slightly absurd but suggestive juxtapositions.  Each map tells a story through cartographic creativity, rather than text.  Mapped gourmet coffee prices vs. depleting Latino neighborhoods, cupcake bakeries vs. reported gang activities, households with children vs. house-pet infrastructure (shops, kennels, parks)…these all provide suggestions of the frictions at work in the district, and often by comparing retail trends to demographics.  An upcoming CAGE Lab project will focus similar scrutiny on a linear territory, Oakland’s International Boulevard, in advance of sweeping changes about to emerge from the planning pipeline.  In both SF and Oakland projects, the underlying “story” often flirts with themes of gentrification.  It’s important to note, though, that these map-based examinations are being requested and performed as gentrification-related dynamics swell, not plateau or recede.  This raises the question of whether the creation and distribution of these map/stories constitutes just an observation, or whether they in fact abate or propagate the territorial shiftings identified.

A question from the audience suggested that the factors chosen for mapping on International Boulevard seemed to lean towards the “institutional," rather than perhaps looking at more mobile and elusive district factors such as prostitution.  This insinuates that such mapping might have a bias toward the more fixed and permanent components of life.  The subtle possibilities of what this bias might catalyze, however subtly, is worth considering and, given the exploratory nature of CAGE Lab, fully open to question.

Another question from the audience raised the topic of mapping data derived from charge card usage or cell phone use/location.  This rich and emerging source might of course yield new avenues of cartographic creativity, especially relevant here in the San Francisco Bay Area.