The stereotypical American explorer of wilderness is usually portrayed as a white male. The word “urban” is often a code word for “black.” Oakland native Rue Mapp stands stereotypes on their head. She grew up with a deep appreciation of nature developed over summers at her grandparents’ ranch in rural Lake County. She has become nationally recognized for her leadership in encouraging fellow African Americans to get outdoors. On September 13th, she came to speak to the course Cities and Bodies, taught by Global Urban Humanities Project Director Susan Moffat.

Crister Brady, a student in the class who is pursuing both and MD and a master’s degree in Public Health, describes the two-hour session:

Rue Mapp is founder of the Oakland-based national organization Outdoor Afro, “a network that celebrates and inspires African American connections and leadership in nature.” Mapp’s talk on “Black Bodies in Nature and Wilderness” illuminated our class readings and the week’s theme: “the Nature of Race.” 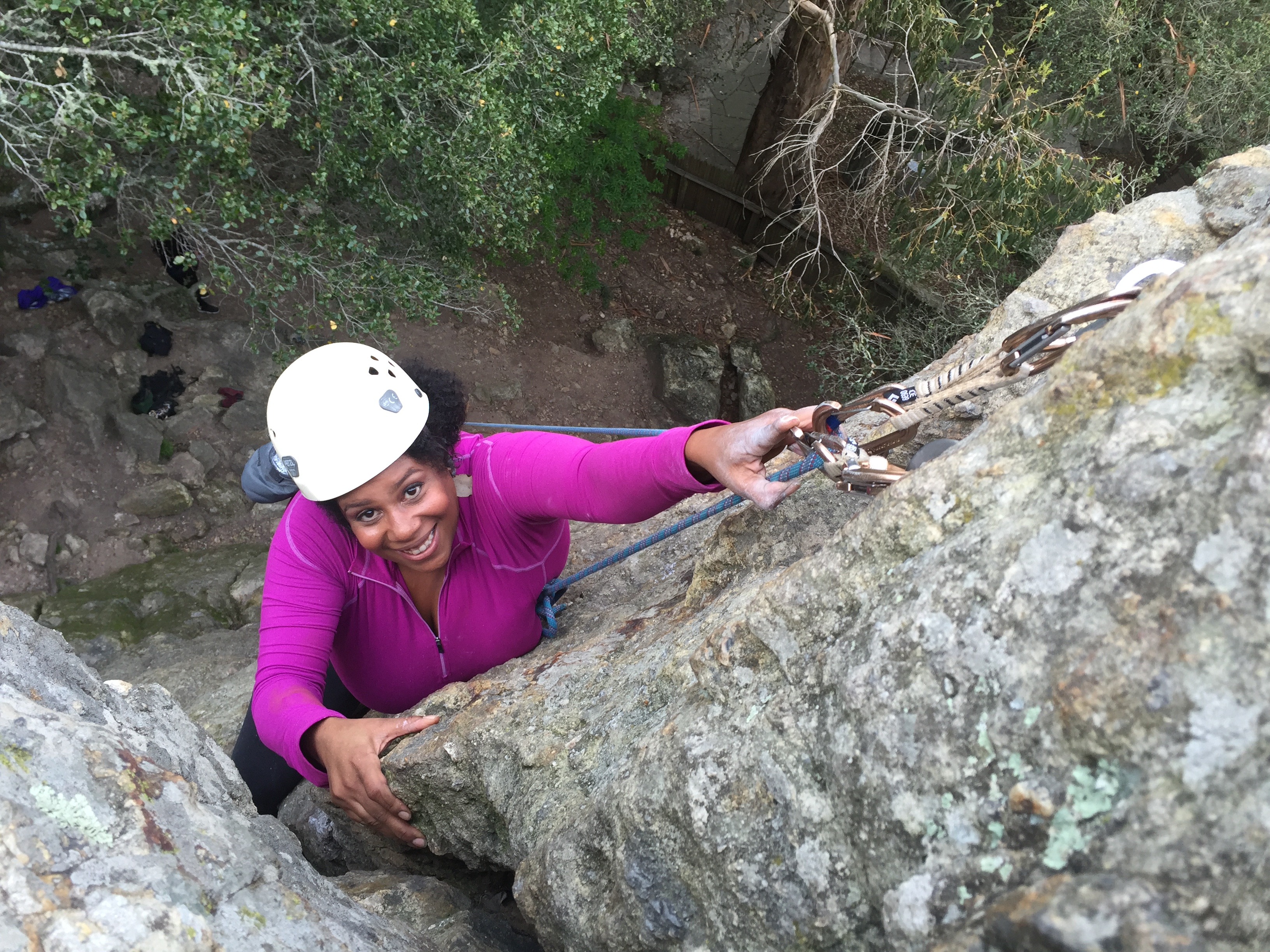 Our readings addressed American conceptions of race, wilderness, and the freedom to move through public and natural space. We took a look at the Jim Crow-era Negro Motorist Green Book, which served as a guide to lodging and restaurants with practical and safe resources that  “assured protection for the Negro traveler.” Gillian White’s Atlantic article noted the “defensive and proactive mechanism” of the Green Book. We also read an interview with the renowned author James Baldwin that connected directly to Mapp’s work: “What one has to do as a black American is to take white history as written by whites and claim it all…”

Ta-Nehisi Coates, in an essay written to his son from the book Between the World and Me, identified racism as a visceral experience for black bodies in contrast to “the dream” lived by much of white America, which enjoys access to safe public spaces under a veil of “American innocence” that accepts racism as “beyond the handiwork of men.” Similarly, William Cronon in Uncommon Ground explores the concept of an uninhabited wilderness as a human invention set aside initially for the wealthiest (white male) citizens as a form of “cultural imperialism.”

Mapp shared stories and photos from her youth in the outdoors, her high school days in Oakland, and her experience as a re-entry student juggling parenthood with the pursuit of a degree in art history at UC Berkeley. After graduation, she grew Outdoor Afro from modest beginnings as a blog into a national organization. 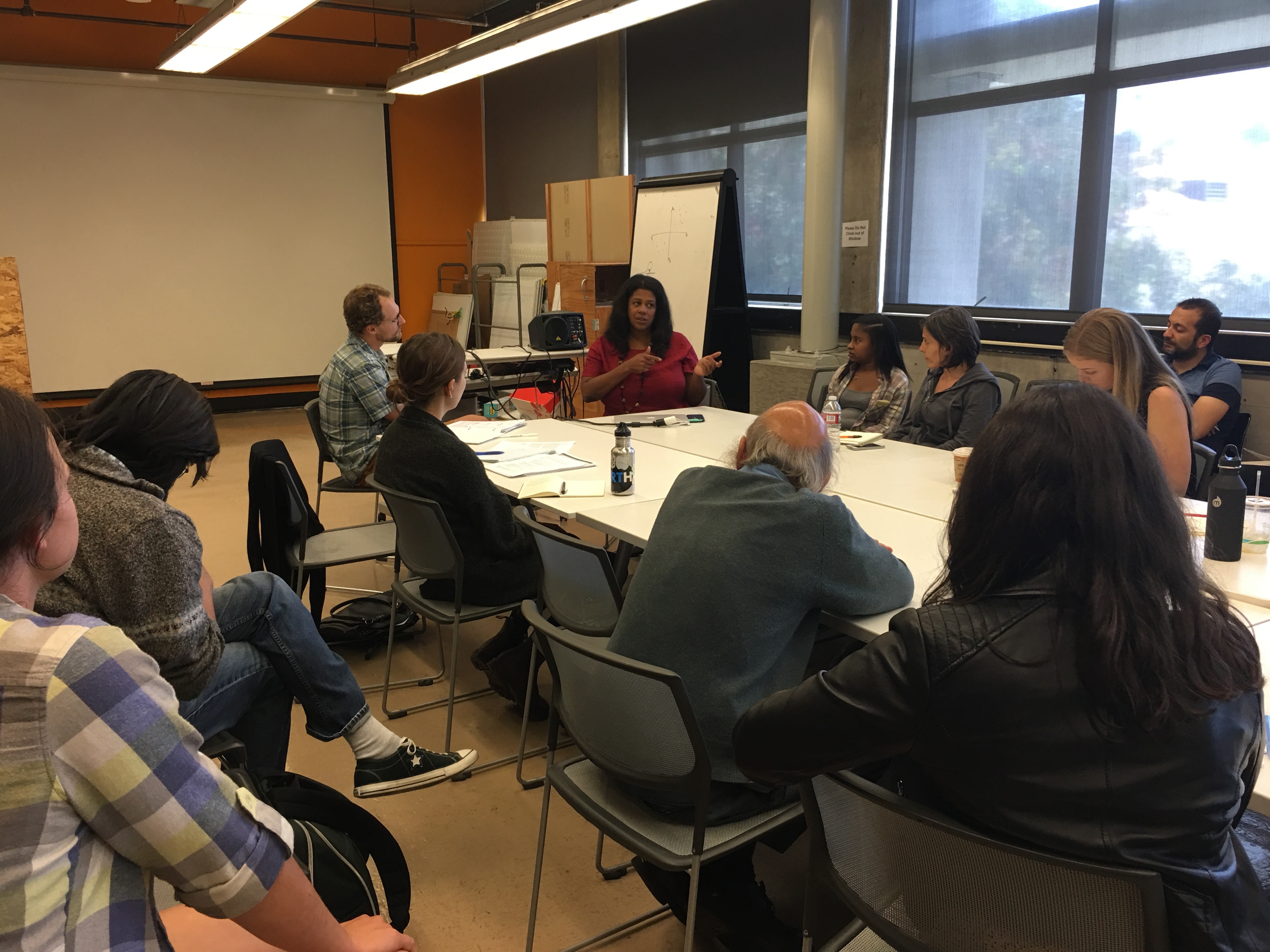 Two aspects of Mapp’s story that affected me most as a medical and public health student were her focus on the healing communities through the power of being in nature as a group and her focus on families and caregivers. Given the recently documented and ongoing police violence towards black communities, Mapp and Outdoor Afro have organized “healing hikes” as a way to respond and return to the healing power of nature that has brought black communities together in the US for centuries.

In a blog post after the first healing hike in 2014 following the death of Eric Garner during the course of his arrest in New York, Mapp wrote, “We recall how Harriet Tubman led our people with and through nature to help us find freedom. The March on Washington brought together thousands of all hues in a national park to demand civil rights.” I was struck both by the creativity of this approach towards violence, but also by the power of calling upon a community’s own history for strength. By stepping outside of the cities that hold violent memories and confrontations for many people of color, healing was able to occur.

Mapp pointed out that Outdoor Afro does not focus its programs only on young people of color, but specifically on families and caregivers as those who will have the most impact on consistently empowering others to be able to enjoy nature and find their place in it. This comprehensive approach seems to be unique in a non-profit environment that involves competing for funding that specifically targets certain slices of communities.

Finally, one of Mapp’s fans in the audience, author and publisher Malcolm Margolin, said that he feels Mapp embodies the concept of deep hanging out, because of how inclusive she is in her work with Outdoor Afro and the joy she brings with her. I felt that this defined Mapp’s story well.

In terms of my own medical and public health studies with people experiencing homelessness, Mapp’s approach to community engagement and empowerment reminded me of the importance of joy and shared experience. Just as Mapp has identified, I’ve seen that issues of representation in nature and other health-promoting environments are deeply intertwined with community health.

I’m reminded of the interactions between people experiencing homeless along the river in Sacramento and the lycra-clad road bikers and runners on the river trails. The nature trails are viewed as paths towards home and refuge by some, and by others as public space to be enjoyed and admired for its lack of a human footprint. Could the interaction between these two groups form a common ground for health advocacy or are they too incompatible with the dominant views of nature to allow for inhabited public space?