“The spectacle is not a collection of images; rather, it is a social relationship between people that is mediated by images.”
- Guy Debord, The Society of Spectacle

In 1967, Guy Debord offered a radical critique on modern societies in his book The Society of Spectacle by arguing that the nature of society changes with the advent of mass media. Raymond Williams in his book Keywords (1985) describes “Spectacle” as a “Theory of Sight.” While much has been said about the role of sight in the making of a spectacle, Nicholas Mathew presents a new component of spectacles. He throws light on the role of sound in creating urban spectacles. In his presentation titled “Urban Space, Spectacle, Memory and Music in Nineteenth-Century Vienna,” Mathew discusses the relationship between music and social life, and the making of public spectacles in 19th century Vienna. The images of the 1814 Vienna Prater Fest that Mathew showed are depictive of this, illustrating many people gathered to witness a musical performance. It was described as “a poetic and sublime scene beyond description.” “Spectacle” in the Oxford English Dictionary is defined as “a person or thing exhibited to, or set before, the public gaze as an object either (a) of curiosity or contempt, or (b) of marvel or admiration.” For the burgeoning middle class in the 19th century, a large concert by a famous musician like Beethoven was not only a marvel of music but also a sight to behold. Beethoven’s piece that Mathew played during the presentation, when first performed in Vienna, he explains, was as visually captivating as it was musical. The Victory Music was intended to re-create the imageries from a battlefield for all those who weren’t present. The orchestra, divided into two parts, marched onto the stage from two sides and met in the middle to perform this piece. 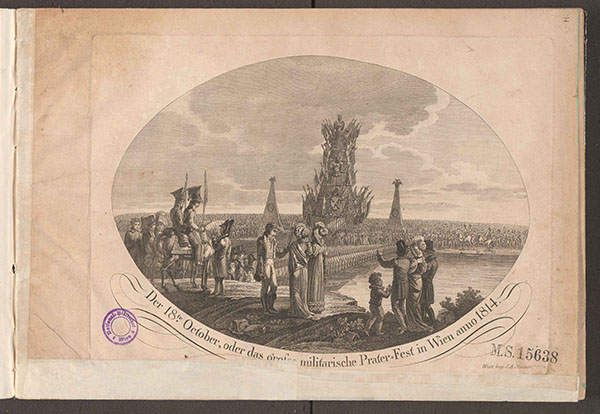 Image showing a huge gathering of people on the other side of the bridge – Prater-Fest, Vienna 1814. Image courtesy: Nicholas Mathew


Vienna is the capital and largest city of Austria. It has had a long-standing tradition of classical music, where several famous musicians like Mozart, Joseph Haydn, Beethoven, Franz Schubert, Johannes Brahms, Gustav Mahler, and Arnold Schoenberg lived and worked. Vienna houses some of the best opera houses, theatres, and concert spaces in the world. Viennese Balls are major tourist attractions, and have been a part of the city’s cultural legacy since the 19th century. These Balls are night-long events held in large concert halls or opera houses where up to nine live orchestras perform together. Music is often said to be a key part of Viennese culture and urban life. Mathew briefly discussed the role music plays as an instrument for political expression. In Napoleonic Vienna, musical compositions were often responsible for shaping new public experiences in urban spaces.

The new musical compositions reflected changes in society and responded to them in various ways. With the advent of a new class of bourgeoisie, the classical period in Vienna (late 18th century to early 19th century) was when public concerts were first held on a large scale, and became an important part of daily life in the city. 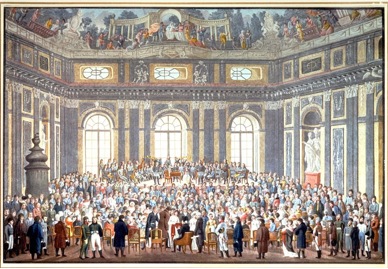 Performance under the direction of Antonio Salieri of Haydn's Creation at the Old University Hall in Vienna on 27 March 1808. The 76-year-old composer attended; he can be seen seated in the front, at the center, wearing a black hat. Image courtesy: https://sites.google.com/site/jarice18thcmusic/17-vienna-in-the-napoleonic-era


The moving away of musical performances from courtly rooms to the public sphere was reflective of an egalitarian nature of music. Ignaz Von Mosel, an 18th century Austrian composer, notes here the bonding effect of music:

Here music daily performs the miracle that is only otherwise attributed to Love: it makes people of all social stations equal. Members of the nobility and of the bourgeoisie, princes and their retainers, those in authority and those beneath them sit together at one music stand, the harmony of the music making them oblivious to the disharmony of their social standing.

In a city like Vienna, which has a strong classical tradition, and which in the 19th century was arguably at the forefront of radical musical creations, the city itself becomes a living museum for showcasing past musical traditions. The place is simultaneously both real and imagined. In his famous book Practice of Everyday Life, Michel de Certeau compares the act of walking to speech:

Here the city can be thought of as the metaphorical theatrical space of everyday life. Then, to quote Mathew, “public would be actors. They will be both spectators and performers in the city.” Lefebvre describes the experience of the “polyrhythms” of the city as “he who walks down the street is immersed in the multiplicity of noises, murmurs, rhythms.” Mathew’s presentation of the role of music in creating new civic sensibilities in 19th century Vienna can be understood as the historical backdrop for the impact that thousands of live concerts and public performances have on public life. Music, even today, has the potential to create an urban spectacle like no other.

Swetha Vijayakumar is a PhD student studying the History of Architecture and Urbanism.