"Standing on the bare ground, -- my head bathed by the blithe air, and uplifted into infinite spaces, -- all mean egotism vanishes. I become a transparent eye-ball; I am nothing; I see all; the currents of the Universal Being circulate through me; I am part or particle of God."
-- Ralph Waldo Emerson, Nature

Professor Greg Niemeyer describes two frameworks of data collection: "hard eyes" and "soft eyes." The former is closer to the scientific method, relating information back to an explicit hypothesis and emphasizing focus over risk. On the other hand, "soft eyes" invoke the approach of Ralph Waldo Emerson, who proposed that nature must be appreciated with a transparent eye; that is to say, we become more connected to the significance of our world by seeing it and not looking for it.

In common practice, data science is a pursuit of quantified evidence in support of a hypothesis: the domain of hard-eyes. To be sure, many purposes can be served with a focused, solution-oriented approach. Companies like The Climate Corporation and Propeller Health enable citizens to protect their natural and bodily resources by retrieving organized environmental data. Rather than collecting information for the sake of later analysis, Professors Niemeyer and Rael utilize sensors to promote action in the present. Sensors tend not to visually announce their affordances, but these sensors emerge in the city of San Leandro housed in colorful casings, a presentation that requires curiosity and direct, tangible interactions from passersby. 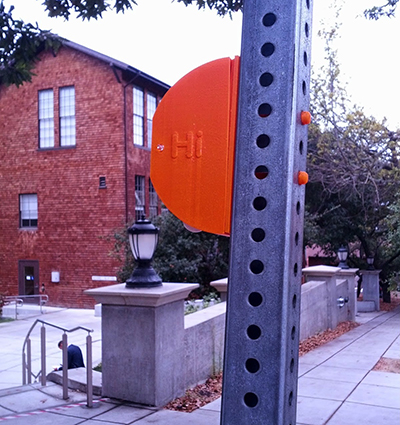 It is also significant that these sensors, via placement and record, are vested in the public. Were the "Hi" sensor featured in a gallery instead of in public at transit stops, the attending audience would reflect a specific type of resident, and their reactions or data would not necessarily be representative of the broader community. Niemeyer describes data as a means to "feel all the people walking across the city," a statement which beckons back to the previous lecture in which Georgina Kleege compared her walking stick to long fingers that skirt over the surface of the world. This similarity in Niemeyer and Kleege's description of experiencing a city implies greater intimacy results from using the scope of human senses to read beyond the visual record.

Faith Hutchinson is a candidate for the Master of Information Management and Systems degree at the UC Berkeley School of Information.