Part of the City as Nexus Colloquium Speaker Series

Alison Isenberg, Professor of History at Princeton University and Co-Director of the Princeton-Mellon Initiative in Architecture, Urbanism, and the Humanities, will join the Fall 2017 GUH Colloquium for a special lecture about her new book, Designing San Francisco: Art, Land, and Urban Renewal in the City by the Bay. 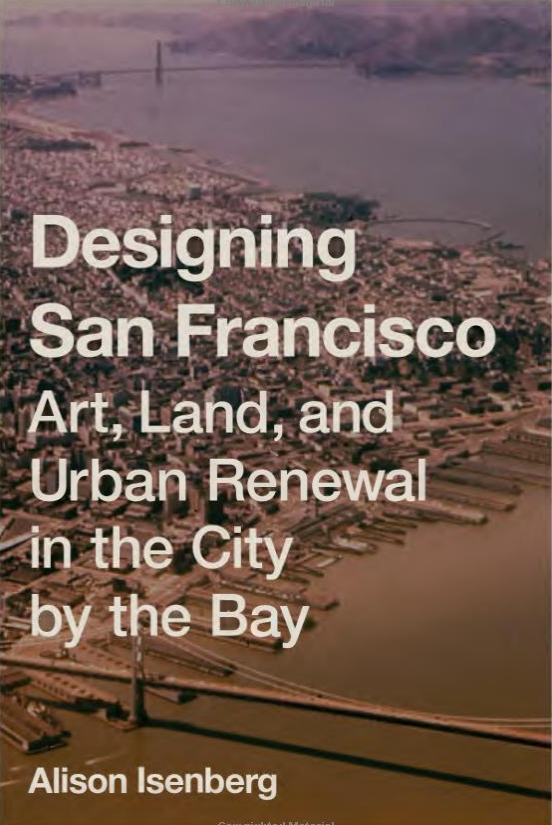 Designing San Francisco is the untold story of the formative postwar decades when U.S. cities took their modern shape amid clashing visions of the future. In this pathbreaking and richly illustrated book, Alison Isenberg shifts the focus from architects and city planners--those most often hailed in histories of urban development and design--to the unsung artists, activists, and others who played pivotal roles in rebuilding San Francisco between the 1940s and the 1970s.

An evocative portrait of one of the world's great cities, Designing San Francisco provides a new paradigm for understanding past and present struggles to define the urban future.

Bring your wallet! A representative from University Press Books will be on hand to sell copies of Isenberg’s new book.

Please be sure to register your attendance in advance. We are expecting a larger than Colloquium-average crowd for this special event.

The Global Urban Humanities Initiative, Department of History, and the Arts Research Center are pleased to welcome Alison Isenberg, Professor of History and Co-Director of the Princeton Mellon Initiative in Architecture, Urbanism, & the Humanities.

Alison Isenberg writes and teaches about nineteenth and twentieth century American society, with particular attention to the transformation of cities, and to the intersections of culture, the economy, and place. Professor Isenberg's book Downtown America: A History of the Place and the People Who Made It (University of Chicago Press, 2004) received several awards: the Ellis Hawley prize from the Organization of American Historians; Historic Preservation Book Prize from Mary Washington University; Lewis Mumford Prize from the Society for American City and Regional Planning History; and an Honor Book award from the New Jersey Council for the Humanities.  At Princeton, Isenberg co-directs the Princeton-Mellon Initiative in Architecture, Urbanism, and the Humanities, and is a Faculty Associate at the Woodrow Wilson School. She co-directed the Urban Studies Program from 2012-2014, and currently serves on its Executive Committee.  An Affiliated Faculty member in the Program in Gender and Sexuality Studies, she is also on the Executive Committee of the American Studies Program.  During 2015-2016 she held an Old Dominion Fellowship, awarded by the Princeton Humanities Council.

Professor Isenberg served two years as president of the Society for American City and Regional Planning History, a multidisciplinary organization bringing together scholars and practitioners from history, design and planning, American studies, geography, environmental history, art history, sociology, preservation, and policy. Isenberg has worked on the boards of the Urban History Association and H-Urban, and was founding review editor for the Journal of Planning History. She recently joined the Hagley Center Advisory Committee.  Before moving to Princeton in 2010, Professor Isenberg taught at Rutgers, The State University of New Jersey (2001-2010), the University of North Carolina at Chapel Hill (1997-2001) and Florida International University (1994-1997). Her scholarship has been supported by visiting fellowships at the Bard Graduate Center for Studies in the Decorative Arts, Design History, and Material Culture (Spring 2010), the Center for Comparative Studies in Race and Ethnicity at Stanford University (2006-7), the Institute for the Arts & Humanities at the University of North Carolina (Fall 2000), and the Schlesinger Library at Radcliffe (1998-9). Shorter term fellowships from the Graham Foundation, James Marston Fitch Foundation, Hagley Museum and Library, Rockefeller Archive Center, Winterthur Library, and the Beverly Willis Architecture Foundation have provided generous research resources. Before pursuing a Ph.D., Isenberg worked in affordable housing, parks planning, and historic preservation in New York City.