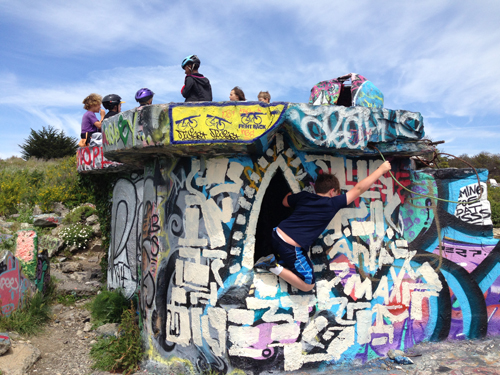 Susan Moffat will give a talk on The Atlas of the Albany Bulb, her oral history and mapping project about a landfill on the eastern shore of San Francisco Bay. The Atlas project will include a website presenting stories, maps, and images of this vegetated pile of rubble known for its spectacular views, informal art, dog walking, and a longstanding encampment of residents who created homes, community spaces, and monuments out of found materials. This community was evicted earlier this year to make way for a state park. In addition to the website, Moffat is contributing to an exhibit of documentary and art work on the Albany Bulb that will be mounted at the SOMArts gallery in San Francisco in February 2015.

In her talk, Moffat will reflect on how conceptions of nature and culture affect this highly contested site, which has been the location of bitter battles between people holding different notions of the proper uses of public space, and of what a park should be. She will reflect on methodological and ethical issues associated with documenting and representing people and their places, and on the different ways ethnographers, archeologists, oral historians, journalists, sociologists, urban planners, landscape architects, geographers, biologists, and others investigate urban sites like this one.

Susan Moffat is project director of the Global Urban Humanities Initiative. She has worked in the fields of affordable housing, environmental planning, land conservation and regional planning advocacy, and journalism. Her writing on Asian cities, ethnicity and place, and environmental issues has been published in The Wall Street Journal, the Los Angeles Times, Fortune, and Planning, and she has curated exhibits on cartography and on the San Francisco Bay shoreline.

The Atlas of the Albany Bulb is a project of the Global Urban Humanities Initiative, which is funded by the Andrew W. Mellon Foundation. The Atlas is made possible with support from Cal Humanities, a non-profit partner of the National Endowment for the Humanities.

William Cronon, The Trouble with Wilderness; or, Getting Back to the Wrong Nature from Uncommon Ground

Are we a progressive region accepting of hybrid, diverse landscapes, or are we only comfortable within our own homogeneous niches?

Acceptance of the Bulb's multi-layered temporality could reduce the schism between opposing viewpoints.