As an architecture student who graduated from a fine arts school, the lecture by Professor Lauren Kroiz inspired me a lot. I’ve seen the Berkeley city logo many times—mostly it’s just in black and white. During the lecture, I learned that this logo has a deep relationship with this multi-racial city and that it symbolizes the city’s diversity.

These four different-colored profiles of heads can be found on the bottom center of a mural which is called “Berkeley--The City and its People.” This delicate masterpiece was painted by artist Romare Bearden. The painting was composed on seven fiberboard panels joined together. It’s Bearden’s largest known collage and the 12-foot by 16-foot mural for the City Council chambers impressively showed the co-existence and harmony of the city. 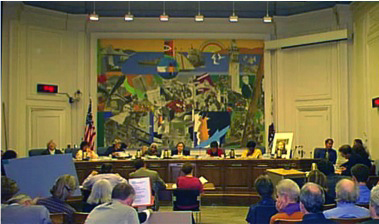 What’s really interesting is that Bearden worked as a social worker in New York City for 30 years. As a person who was not rooted in Berkeley, Bearden traveled throughout the city for only a few days to collect materials for the painting. Afterwards, he went back to New York to finish the painting. It combines a great number of diverse, fragmentary images and abstract shapes, vertical lines and grids which enhance the visual expression. The elements of photographs of faces of different colors and races, architectural details, figures of importance to Berkeley’s history, and abstract motifs depict the diversity of the people and their lives.