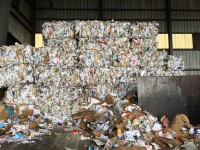 About the writer: Connie Zheng is an artist and writer currently pursuing her MFA in Art Practice at UC Berkeley. She uses the dialogue between text, drawing, painting and time-based media as a conduit through which to consider the environment of the media and the media of the environment, and these investigations tend to center on the visual culture around environmental crisis and economies of waste and creative reuse. She received her BA in Economics and English from Brown University and worked as a researcher before beginning graduate school. Here, she writes about her current practice and research on cardboard…