Posted on January 27, 2016 by Genise Choy
Filed under: Mexico, Symposium

The symposium’s first panel entitled “Modernity in Process: Creative Practice, Urban Experience and the City” began with a presentation by Tatiana Flores, Associate Professor in the Department of Art History at Rutgers. Professor Flores’ presentation, “Mexico City: Avant-Garde City?,” explored the history of the Mexican avant-garde with a focus on the relationship of Manuel Maples Arce to the work of modern artists. Maples Arce is known for his 1921 publication Actual No. 1. This document, seen as a manifesto of the avant-garde movement, asserted that the new post-revolutionary era required a renovation in the arts that would occur through the embrace by contemporary artists of modernity and subjects including the city and new technologies. As Flores stated, Maples Arce believed that the “modern artist should be a city dweller.” Following an examination of the work of numerous modern artists who engaged with Maples Arce’s texts, Flores concluded her presentation, bringing the conversation full circle with the example of contemporary artist Rafael Lozano-Hemmer, who in 2000 “realized Maples Arce’s dream of a technological modernity” through his installation Vectorial Elevation in Mexico City’s historic Zócalo Square. According to Flores, through this interactive installation, which allowed for the engagement of masses of locals as well as a global audience, “Lozano-Hemmer achieved a milestone in Mexican art. Not only did he demonstrate the relationship that Maples Arce had established between technology and globalization. He was also able to address and connect a mass audience in a way that had eluded the artist of the post-revolutionary avant-garde.” 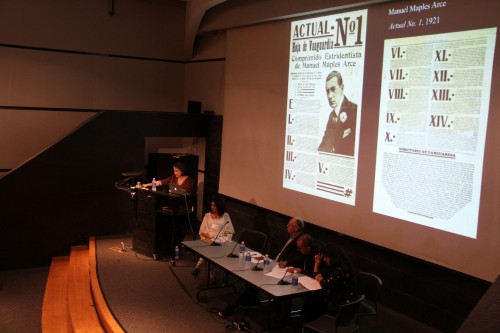 The second presentation entitled “Art Activism and New Ways of Being Mexican” given by Edward McCaughan, Professor of Sociology at San Francisco State University, continued the conversation of Mexico’s art history through a discussion of how, over the past four decades, art has served as a vehicle for the production and expression of a new Mexican identity. Drawing on the work of cultural sociologists who “understand identities, ideologies, and subjects as being constituted by not simply reflected in art” and Latin American social movement scholar Sonia E. Alvarez, McCaughan described the role that Mexican social movements and artists have played in deploying alternative notions of citizenship and unsettling accepted cultural meanings beginning with the student movement of 1968. Following a brief historical background of Mexico’s student movement, McCaughan moved to a discussion of artist collectives known as “Grupos” that were a legacy of this history. McCaughan described that at its height the Grupos Movement included at least a dozen collectives in Mexico City with others in areas like Guadalajara. These groups created art that touched on issues ranging from corruption, poverty and repression to environmental destruction and U.S. imperialism. Of particular importance to McCaughan’s presentation were examples of street art, feminist art, and art associated with the 1970s Mexican Homosexual Liberation Movement. McCaughan concluded his presentation with a discussion of a recent project intended to archive the work of LGB activists and allies. 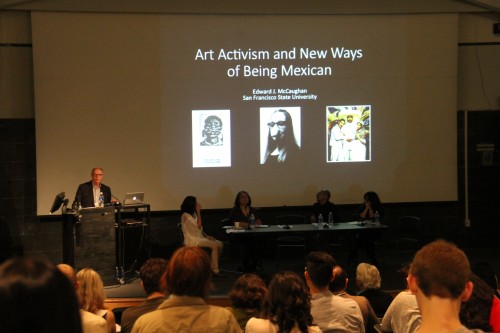 Finally, the third presentation entitled “¡Me Encanta La Ciudad! The Perils of a More User-Friendly Mexico City” given by journalist, author, and current Mexico bureau chief for VICE News, Daniel Hernandez, moved to a discussion of lived experience in contemporary Mexico City. Hernandez’s presentation discussed recent development or gentrification of Mexico City’s center, which despite allowing for some improvement or as Hernandez suggested, making Mexico City “more livable and inviting to foreigners” have in fact “masked or hidden the underlying problems that the vast majority of the city’s population still face.” These changes followed on the heels of the campaign referenced in the presentation’s title ¡Me Encanta La Ciudad! that began in mid-2000. Hernandez’s presentation, describing the lived reality of Mexico City today added greater context to the ideas put forth by both Flores and McCaughan. While Flores and McCaughan expressed a sense of optimism for the possibilities of art in the increased democratization of Mexico City’s public sphere, Hernandez reminded attendees of the continued challenges and violence that plague Mexico City today. 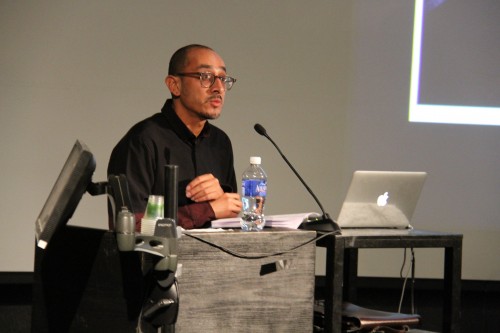