Posted on September 21, 2013 by Alex Craghead
Filed under: Reimagining the Urban

Reimagining the Urban participants have been asked to submit a blog post “on a keyword you see debated in the Bay Area arts, policy, and planning landscape.” This posting is by Raquel Gutiérrez, IN COMMUNITY Program Manager for Yerba Buena Center for the Arts. It was originally posted in the Arts Research Center of UC Berkeley blog ARC Muses. 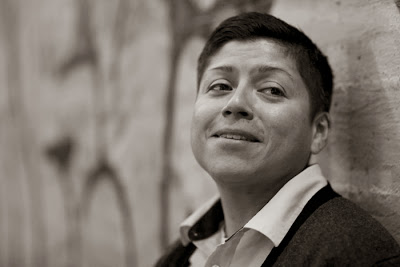 Arriving in San Francisco, I am reminded that this city in large part is designed to the scale of the average human being, with humane commuting strategies that put Los Angeles to shame. But what makes the space here different is that there is less of it. Space that accommodates a multiplicity of households has already been spoken for but that doesn’t stop a rightfully entitled newly moneyed class from coming in and taking it. It makes an object like the Google Bus an easy receptacle to fill with collective fear and loathing. Never mind the fact that our lives are that much better because Google exists. Admit it or you can just e-mail me from your gmail accounts quietly. No one has to know how much you enjoyed playing the Moog when Google honored Bob Moog’s 78th birthday last year.

The ghosts of Chavez Ravine will never rest. People will be forced out and the cities they live in, they pay taxes in; the cities that have made these social contracts to take and educate our children; help us when our homes burn down; heal us when we are hurt will somehow be the first to betray.

If you’ve lived it, you call it gentrification or aburguesamiento. If you talk about it from a detached perspective or if you’re in a planning department, you probably refer to it as displacement.

I am an interloper, first and foremost, and especially when it comes to Bay Area arts and cultural organizing. It’s good to be aware of that before setting out to do community engagement for a large arts center located in one of the most fraught neighborhoods in downtown San Francisco. I arrive with open hands to greet the closed fists of folks in the South of Market neighborhood known as SOMA who are tired; weary of new people though are way too friendly to really show it. They are Filipino youth; veterans of wars and military actions in Vietnam and Kuwait; chess lovers.

We are on the verge of losing youth’s voices in the same we way lose elders to death; and the scarcity mindset that kicks in producing a discourse of mine/territoriality which feels similar to Minutemen stalking men, women and children in the U.S.-Mexico desert.

Don’t come here; this is mine.

People turn other people into suspects.

So how do you facilitate art-making with a community-specific agenda when community is in the middle of meeting changes? I posit that site-specificity has to be questioned as sites become contested. Specificity I dare say lacks that efficacy it once had when social practice enabled a purview contingent on a radical condition of possibility. And now these conditions placed upon sites where communities we’re interested in partnering with are radical in a totally frightening ways that affect individuals whose perspectives can enrich the way we think about “the arts.” So I suggest we instead think about making site-responsive community-led arts collaborations that give way to transforming the current arts institutional landscape. Respond as artists, sure, but as institutions more importantly, to what is happening on the ground, in the trenches with people that are living with the specter of change daily.

Posted on September 21, 2013 by Alex Craghead
Filed under: Reimagining the Urban