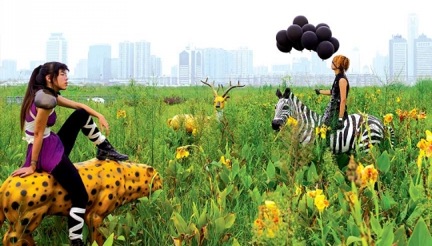 Presentation by Prof. Margaret Crawford (Architecture) on Art+Village+City in China's Pearl River Delta, a traveling research studio she will be teaching with Assistant Prof. Winnie Wong (Rhetoric) in Spring 2015.

Before its current incarnation as the "factory to the world" and one of the densest multi-city clusters in the world, the Pearl River Delta (PRD) region was covered with agricultural villages. These villages are today surrounded by urban development as "villages-in-the-city," and are home to migrants from all over China. Due to their unique legal status, today urban villagers are among the few Chinese citizens who control their own land, build their own houses and elect their own leaders. Since 2006, central and municipal government policies have worked toward eliminating the village as an independent entity in the city. Art, design, and the creative economy have been central to this tension between village and city, and the "art village" has emerged as a transformative and distinctive urban phenomenon.

There are no readings for this week's presentation.

Old and out-of-date opinions about urban villages should be rethought.

What is the role of artists in resisting pressures on the autonomy of villages swallowed up by urbanization?