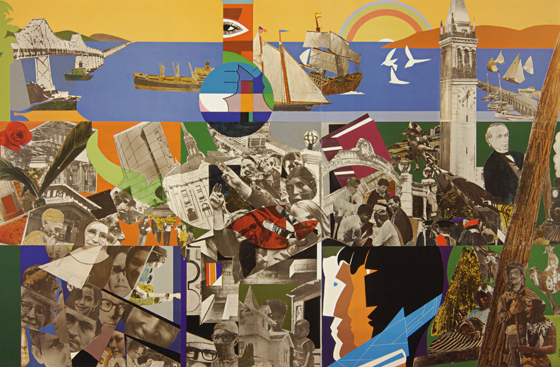 Assistant Professor Lauren Kroiz, History of Art, will present on Romare Bearden's Berkeley mural, an important work of public art that is the source of the ubiquitous multi-ethnic logo found on everything from City of Berkeley trucks to stationery and brochures.  She will reflect on the relationship of painting, the construction of place, and regional planning. In her Fall 2014 course Regionalism, Nationalism, Globalism, Kroiz examines critical models of place and its influence developed in the twentieth and twenty-first century, exploring authors and artists including Lewis Mumford, Gayatri Chakravorty Spivak, Thomas Hart Benton, and Richard Diebenkorn. Kroiz's current research focuses on the ways regionalist educational projects linked art and citizenship in the United States during the 1930s and 40s.

Kroiz's book Creative Composites: Race, Modernism, and the Stieglitz Circle, was awarded the 2010 Phillips Book Prize and was published by University of California Press in 2012.

Bearden's Berkeley–A Mural by a Visiting Artist, Curated by Committee by Faith Hutchinson
The Surprising Origins of a Familiar Logo by Elisa Russian
A Symbol of Diversity by Yuqing Nie

How was a symbol of the new Berkeley curated, from artist selection to content?

Collage and photomontage create a narrative that is deeply personal but also reflects the diverse realities of the community.