As part of the ongoing campus initiative Global Urban Humanities: Engaging the Humanities and Environmental Design, the Arts Research Center co-sponsored the Reimagining the Urban: Bay Area Connections Across the Arts and Public Space on September 30, 2013. Participants have been asked to submit a blog post "on a keyword you see debated in the Bay Area arts, policy, and planning landscape." This posting is by Christina Gossmann, a second year in the Master of City Planning program at UC Berkeley. This post originally appeared in the ARC blog, Muses.

The last session of the day, What is the “Bay” in the Bay Area? Creating Nature, acknowledged the elephant in the room—the Bay—but it also revealed the ambiguity of ownership surrounding this, “our” Bay. From Brad McCrea’s mention of changing legal rights (“Most things you can do on land, you can’t do in the Bay.”) to Louise Pubols’ historical account of the Emeryville shoreline as a “junky throw-away space” where artists/students/people were not afraid of “messing up,” we caught a glimpse of an immensely complex puzzle: public nature.

The concept of public space is hard enough to define, let alone create, as planner after planner has learned in practice and we, as a class, have read and discussed this semester. Applied to natural space, the level of complexity around its publicness increases significantly—possibly naturally so. To enforce guidelines around public space and disallow appropriation, certain rules apply. In the face of nature’s vulnerability in cases of misuse, these rules weigh heavier. 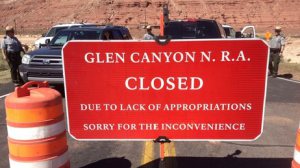 illustrative—and timely!—example is currently unfolding as a result of the U.S. government’s shut-down, enacted on Tuesday, the 1st of October: America’s 401 national parks are closed. Why? Because “the only way I can protect these places during this period is to shut them down,” as National Park Service Director Jonathan Jarvis told National Public Radio earlier today. The government would expect vandalism, theft, poaching, if national parks remained open to the public without appropriate enforcement.

Curiously, and somewhat confusingly, national forests remain open. On one hand, public forests have more access points than parks and are therefore, simply logistically, harder to control. On the other hand, “those lands are open to a wide range of public activities,” explains Jarvis.

This reasoning is dissatisfying to me on multiple levels, and this is where I will bring us back to “our” Bay. As Susan Schwarzenberg, Brad McCrea and Louise Pubols have engagingly articulated, the Bay is very much contested (just remember the “outlaws,” imperial powers and polluting corporations all claiming a piece of the Bay). Moreover, I would argue that, unlike National Park Service Director Jarvis claims, the extent to which land can be used does not determine, or even slightly influence, its access. Again, I’d like to point us to a timely example. 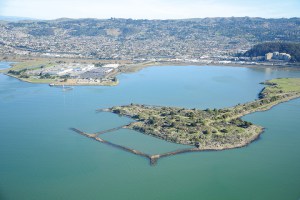 The Albany Bulb is a landfill located just off of the Golden Gate Fields racetracks. Graffiti enthusiasts, dog-walkers and the homeless have been mingling on the half-island for years. In short, the land is used extensively. And yet, illegally. The City of Albany has recently voted to begin enforcing no-camping laws at the Albany Bulb. The 70-odd homeless are expecting the authorities any day now.

Above: The Albany Bulb. Source: http://www.berkeleyside.com/2013/09/05/whats-that-san-francisco-bay-as-seen-from-the-air/

My provocation is this: Maybe the question Linda Rugg raised around the extent to which we define ourselves as people living by the Bay and our impact on nature as well as nature’s (creative) impact on us, could be altered to become a self-examining one: Who is the “we” interacting with nature, and does every Bay Area resident have the access or right to this interaction?