Shannon Steen’s presentation about the shifting role the term “creative” has had over the years provided a fascinating glimpse at the power of words to define and redefine populations, and their respective perceived value to the city and its rulers. Specifically, she carefully demonstrated how Richard Florida’s famous invocation of the “creative class” of liberated and affluent workers in his eponymous 1991 book has been used carelessly by planners, politicians, and journalists to describe a multitude of people, often highly fragmented by more traditional class and identity categories. Specifically, the difference in lifestyle and worldview between a poet and a programmer can be a much bigger wedge than the common educational background the two may share, or the fact that both rely on crafting “new forms” (a fairly durable definition of creativity) on relatively flexible work schedules to support themselves.

Recently, the most vivid skirmish in the creative civil war has been related to an astronomical rise in the cost of living in the Bay Area, particularly in San Francisco, along with the fastest rise in income inequality in the country. One question comes to mind as I read about the latest unbelievable price statistics, or the rise of Ellis Act evictions, or the people struggling to get by on fixed incomes: haven’t we been here before? Some of the stories could have been copied and pasted from 1998, swapping Pets.com and Webvan for Uber and Airbnb. Not having lived through the first boom, one of the most striking differences I’ve seen through accounts of the earlier boom and bust is the earlier focus on radical action against property, exemplified by the Mission Yuppie Eradication Project of the late 1990s. See the posters below for an example of the kind of tactics they advocated, and their extremely specific target businesses (3/4 of the businesses are still around, although Circadia is just a regular Starbucks now, around the corner from KQED’s main office). 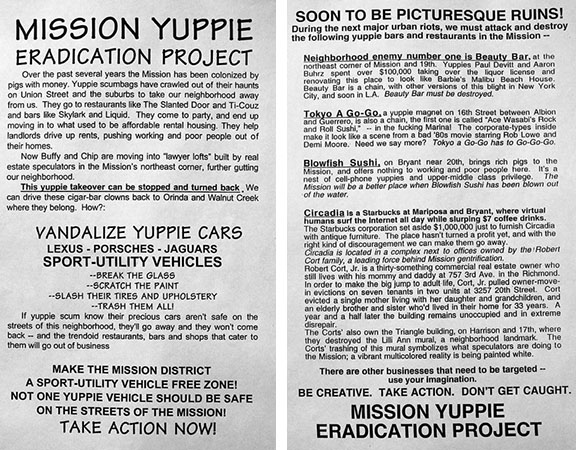 
While the group seems to have been a fairly small, violent segment of a broader movement criticizing Web 1.0 excess in a city full of exclusive parties and double-parked SUVs, I haven't seen anything this radical emerge in reaction to today’s crisis. Maybe the fleet of private buses ferrying commuters down to Silicon Valley is too massive a target, too perfect a metaphor for today's two-tiered economy, creating a handful of gold-plated jobs and a sea of intermittent gigs. Perhaps the most vocal critics of the yuppiefication of San Francisco made their way to greener pastures during the first boom, and what we’re left with is only a shadow of the activist Left who used to call the city home. Maybe the Bay Area’s much-vaunted food culture has been internalized to the point where rock star chefs feel more like creative class allies than mere gentrifiers. Maybe the impact of a decade and a half of slow-boil warfare and economic anxiety has limited the capacity of radical activists and allies to strike out too strongly at today's Crockers and Huntingtons, or the symbols of their wealth and status littering the city. Or maybe the creatives today on both sides of the civil war are just content to wage their battles with words, symbols, and social choreography (sometimes literally, in the case of some of the Google Bus protests), instead of the blunter instruments of bygone days.

Disclaimer: This post is a speculation on the history of anti-gentrification activism in San Francisco, not an endorsement of any particular method of protest, especially violent ones. If you feel the need for physical protest against urban space, may I suggest yarn? If you’re fighting eviction or want to help people who are, considering joining and supporting the San Francisco Tenants Union.

Will Payne is a Ph.D. Candidate in the Department of Geography at UC Berkeley.