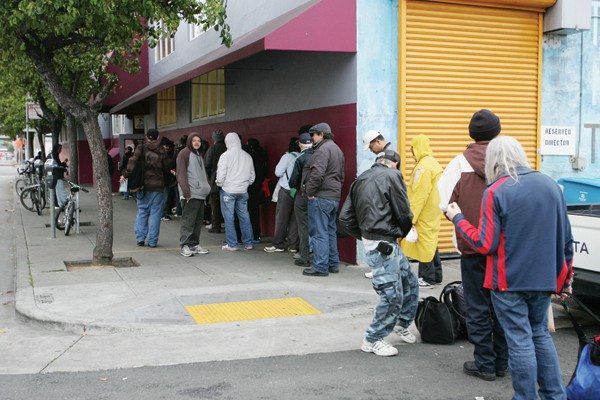 Chris Herring’s work looks at how cities attempt to mitigate homelessness. His presentation shared the results of his research as a PHD Candidate at UC Berkeley. He first showed us a brief history of cities incorporating anti-homeless legislation, the legacy of which being that 50% of all cities have at least one anti-homeless ordinance while some have as many as nine. It has been speculated that this is a type of class warfare but Mr. Herring postulates that the inhumane treatment of homeless people reflects the decline of a social democratic welfare state and the rise of the use of a penal state to try to mitigate the problem. Mr. Herring’s presentation is a reflection on his substantial field work, which includes twenty-three ride-alongs with SFPD, eleven community police meetings, eight city hall hearings, more than one hundred police on homeless person observations, and more than one hundred coalition outreaches with homeless people.

I asked Mr. Herring if he felt that there was a mutually beneficial relationship between homeless people and the city institutions that mitigate it-to which he immediately said no. But he mentioned that some literature was published on the “Homeless industrial complex”. When I researched that the first result was a Huffington Post article published in 2016 by Carey Fuller a former homeless advocate in Seattle. In it, she chastised the then mayor for not having adequate services to accommodate homeless people. Another article in the Washington Post by Daniel Stid in 2012 provides a compelling argument toward the existence of the “social services industrial complex”. In it he states, “the dirty little secret of the social sector is that once government money starts flowing, the nonprofits that have advocated for it and/or who are benefitting from it have a vested interest in keeping it going, even as evidence shows weak or no positive effects.”

Seattle is like San Francisco in some demographics. It too has had a tech boom, which means a steady crop of salaried, college educated millennials will continue to arrive to compete for a finite amount of housing. Young, smiling faces with satchels full of cash and career mobility have brought out the worst in San Franciscan landlords, using legal apparatuses such as the Ellis Act to evict tenants and develop their property. The most important difference between San Francisco and Seattle is the climate. While ending up homeless in San Francisco can be uncomfortable, being homeless in Seattle can be deadly. It would be interesting to see if homelessness is regarded more seriously in colder climates, using Mr. Herring’smmings scale of welfare state against therapeutic penal populism. Are cities addressing the homeless problem with outreach, substance abuse treatment, and mental health services? Or are they kicking the can down the block by having law enforcement and public works employees criminalize the homeless by writing citations that they can’t pay or forcefully throwing away their few worldly possessions?

The passing of Proposition C in San Francisco might represent a concept of the Homeless Industrial complex. While San Francisco has been lax in combating Ellis Act evictions, ravenous property developers have flooded the market with luxury lofts; many of which stay vacant. The tech sector cannot be blamed for homelessness, nor should we blame the hordes of educated young people flocking to the Bay Area. The generators of so much revenue are themselves creating a new bureaucracy with the extra 1% tax levied upon them as written in Prop C—all of which to combat a problem that was exacerbated by San Francisco property owners. This large sum of money has to go somewhere, and will most likely be a boon to many city contractors as they build navigation centers, clinics, and public bathrooms. Proposition C is a neoliberal solution to a neoliberal problem.

Of the great amount of revenue for city contractors that San Francisco’s homeless population are about to generate, how much of it will actually benefit them? This will be the important metric moving forward with regards to San Francisco, Seattle, or any city in the world. If two years down road, the homeless population of San Francisco significantly drops, I too could declare that homelessness and the state are not entwined.