No phenomenon can be explained outside of its context. In his lecture, “Lessons in Slum Non- Clearance from the World’s First Megacity,” Professor Jordan Sand talks about the historical context in which Edo became Tokyo, the largest metropolitan area in the world.

The buildings in Edo were destroyed by fire approximately once every 5 to 10 years. The temporality of place made investments in real estate not worthwhile. In this setting, Professor Sand brings the unique story of Osaki Tatsugoro, an illiterate builder who purchased peripheral land at the end of the 19th century and built a neighborhood called Nishimaru-cho that had approximately 300 housing units.

What I found most interesting about Osaki’s story is the lease agreement he had his tenants sign in which the tenants gave away their right to all the human waste they produced at the site so that Osaki could sell it as fertilizer. The lease agreement also states that when a tenant does not follow said agreement, Osaki is allowed to take out all the outside shutters and floor boards from the house to deter the tenant from staying.

This relates directly to a finding Professor Sand presented in the form of an image of what people from Edo took with them in the case of fire--their textiles, floor boards and movable doors. 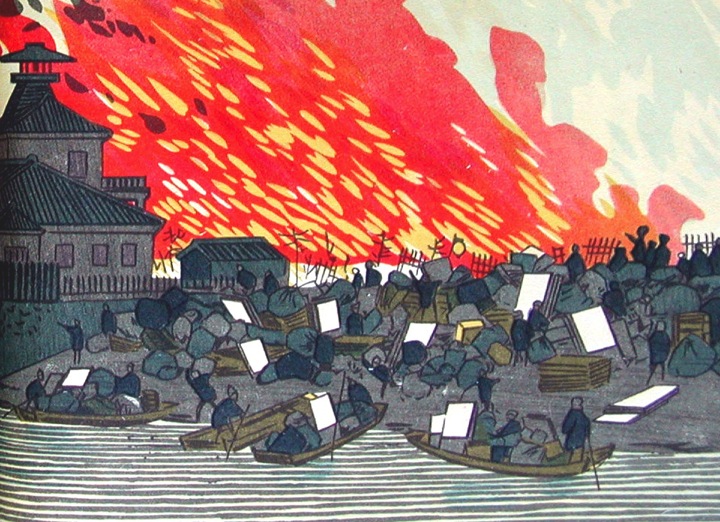 
Both of those examples, Osaki’s lease and the image of what people chose to save from fire, can teach us the importance of movable materials in historical Tokyo. When everything can be destroyed quickly, things need to be moved quickly. This, Professor Sand says, can teach us about the importance of flow. When we come to look at a city like Tokyo we should consider looking at the movement of materials, the movement of “stuff,” rather than try to investigate the space, as it might be that those are still the things that are valued in a place like Tokyo.

Yael Hadar is a graduate student in the UC Berkeley Department of Landscape Architecture and Environmental Planning.